A 9-year-old Kenyan boy who made a wooden hand washing machine to limit the spread of Covid-19 received a presidential award on Monday. Stephen Wamukota, from Bungoma County in western Kenya, was the youngest of 68 people to receive the award from President Uhuru Kenyatta.Wamukota built a semi-automatic machine to help curb Covid-19 in Kenya, which has reported more than 2,000 confirmed cases. Patrick Amoth, acting director general for Kenya’s Ministry of Health, and Wachira Waruru, managing director of Royal Media Service, also received the presidential award.Wamukota’s father, James, told CNN that his son came up with the idea to build the machine after learning how to stay safe from Covid-19 on a local TV channel.”The first time the president announced Covid-19 infection in our country, it was said that everyone should wash their hands regularly to prevent the virus. My son told me that time that he had come up with a structure to help make hand washing easier,” he said.

Wamukota gathered wood, nails and a small water tank to create the hand washing machine.James, who repairs electronics for a living, says he came home one day and realized his son had built the machine with some leftover wood he planned to use to make a window.”I saw that what he built wasn’t stable so I helped him make some adjustments. I didn’t want it to fall apart,” he said. 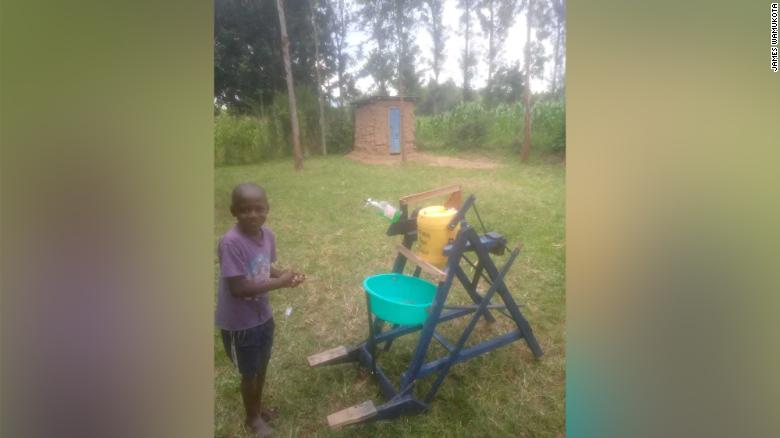 Stephen Wamukota’s machine has two pedals to release soap and waterThe hand washing machine is held together by wood and has two feet pedals, one to release soap and the other to release water.It allows users to hit the pedals without touching surfaces with their hands, thereby reducing the possibility of contracting the coronavirus.James says his son grasped the idea thanks to Kenya’s school curriculum, which teaches young children how to assemble and construct things.

Wycliffe Wangamati, the governor of Bungoma County where Wamukota lives, promised him a scholarship to complete his primary and secondary education.James says scholarship details are still being ironed out because Kenyan schools remain closed amid the pandemic.”We are waiting for school to open to contact him about his promise. He (the governor) told me that once school opens, he will give him a scholarship to a school that can match his talents,” James said.BungomaDigital@BungomaDigital

Bungoma Governor @GovWWangamati & senator @Cleophasmalala committed to scout for a special school that will help narture the creative talent of Stephen Wamukota, the 9 year-old who grabbed global headlines for pioneering a home-made hand-washing & sanitizer-dispensing machine.

Wamukota wants to be an engineer, and James says he hopes the presidential recognition opens doors for his son to become a great person in the country.”He is always saying he wants to build factories and become an engineer,” he said. “I hope he does, that he becomes a great person.”