In a town that sells silver-screen fantasies to the world, young Los Angeles entertainers are using their Hollywood talents to inspire and lead a new generation of real-life protesters.

“I tell everybody we’re all superheroes, because superheroes are the best of humanity,” says Ciera Foster, who plays one in web television series “Ninjak vs. the Valiant Universe.”

When not controlling machines with her mind as an African-American superhero, Foster organizes demonstrations against racism and police brutality through the streets of Los Angeles.

Like many in the entertainment industry, Foster — a students’ rights and justice reform activist for years — spoke out after witnessing footage of the killing of George Floyd in May.

Many young volunteers create “super-well produced” images of the protests that go viral on social media, including for her Black Leadership Allied Coalition.

Drone footage of more than 20,000 people peacefully marching down Hollywood Boulevard last month spread rapidly around the world, becoming an enduring image of the mass movement.

“We have photographers hanging off bridges and the sides of buildings covering us. They’re sending these full-on Sundance Festival pieces… it’s amazing,” said Foster.

‘We are the change’

His Active Advocate group aims to achieve 100 continuous days of protest, but the thirtysomething leader’s activism also goes back many years.

Suzuki began campaigning as a teenager when he realized his editing skills — honed making skater videos — could be of use for a campaign against big tobacco.

“I’m not an overnight activist, I am an organizer,” he says, noting that many of those who support him also work in entertainment.

“We all work in the creative economy. When you’re creating something, you are innately developing a conceived idea, and the idea is driven with passion. Right now, the passion is destroying racism.”

For 28-year-old filmmaker AJ Lovelace, that means “doing socially conscious films and plays” as well as using technology and social media to help protesters “find the specific group they align with the most.”

“My plan to keep the momentum going is to continue to create content,” he says. 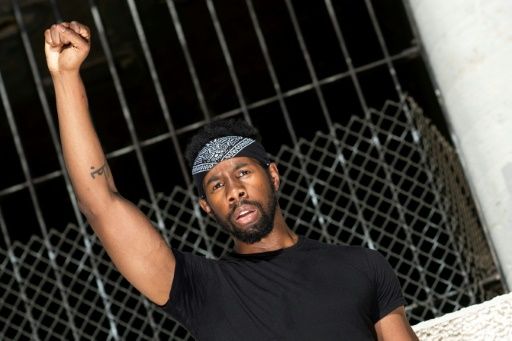 The Los Angeles movement against racism does not just emerge from and employ the techniques of Hollywood, but actively targets the movie industry itself.

Jasmyne Cannick, a 42-year-old social justice advocate, says it is no surprise “that young people in entertainment are pushing back” given the racism still rampant in the sector.

“All the people who ‘love black people’ in Hollywood — they haven’t done a good job, because it’s still been allowed to continue all this time,” she said.

“I guess it just takes young people to come in basically with the attitude of ‘we don’t care — we’re going to get this done.’”

For Paris Draper, a 20-year-old singer and activist, her generation’s focus on empathy and kindness offer hope for radical change.

“We definitely differ from past generations because we are taking the time to hear each other out,” she says.

“I think in this day and age we are all trying to have a better future.”